As component prices fall and technology improves, we are beginning to see more and more smart products at very affordable prices. IC (integrated circuit) companies, OEM’s (original equipment manufacturers)  and retailers alike are all pushing for higher performance in their low end product lines and this is being made possible because of the drop in component prices. IC companies are beginning to make a real impact by releasing new SoC’s (System on a Chip) that are very powerful yet inexpensive and have lower power consumption. These new chipsets have allowed manufactures to produce smartphones at record low prices and it has opened up a whole host of opportunities for other low cost smart devices.

To many companies in the android market the IC chipset or SoC, is the linchpin within the supply chain. It is fundamentally the brain of any product. Further, its performance and price dictate the type of smart device that can be created. As low cost / high performance SoC’s are released we are seeing a greater shift in the market. Manufactures are for the first time being able to create much lower cost higher performance smart products.

In September we saw the release of two comparable, low priced SoC’s from two of the top Chinese IC companies, Allwinner and Rockchip. Only one month after their official release’s OEM’s launched tablet solutions powered by these chipsets. Hatch performed key benchmark testing for samples of both chipsets, the A23 from Allwinner and RK3026 from Rockchip.

On paper the main difference when looking at a direct comparison is the CPU architecture. Rockchip is using the newer more powerful ARM® Cortex™-A9 architecture and is clocking a frequency of 1GHz, whereas Allwinner has the power efficient ARM® Cortex™-A7 clocking at 1.5GHz. They have both chosen to use the same GPU, ARM Mali-400 MP2 Dual Core graphics engines, making a head-to-head performance test all the more interesting.

Allwinner has far higher on-chip integration because of MIPI DSI meaning there are more components on the SoC so developers can have less system components. A higher on-chip integration allows for lower product costs and a more stable and efficient PCBA board. Rockchip on the other hand has potential cost saving benefits with Pin to Pin compatibly with the single core RK2926. This means that manufactures will not have to change the PCBA layout to accommodate the newer chipset. This will be attractive for existing developers as upgrading from previous PCBA designs to dual core will be less expensive and faster to market.

The results of the benchmarking made a clear distinction between the seemingly similar SoC’s.  Here’s what we found! 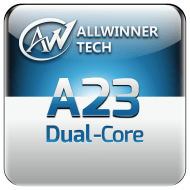 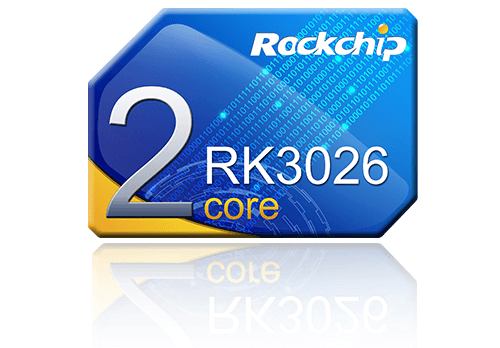 Looking at the Antutu Benchmark scores it is clear that the A23 has outperformed the RK3026. This is due to a number of key differences in their design. First the Allwinner clock speed has a 50% premium on the Rockchip which instantly makes a difference in performance. You might say that as the Rockchip has used the more powerful ARM® Cortex™-A9 architecture this performance difference will balance out, but the CPU architecture isn’t the only factor at play when gauging performance.

Allwinner has invested in optimizing the A23 SoC’s system design allowing for better performance and more efficiency. Also, DDR and GPU design enhancements have been made within the SOC that have positively affected the performance. Further, the A23 utilizes a low power output specifically with audio and video playback at 50mA due to the use of the more efficient ARM ® Cortex™-A7 architecture. We think this will certainly be attractive for developers entering into the tablet space.

This being said what makes the RK3026 still stand out as a top SoC for developers is the 2G communication support allowing for cellular-wireless connectivity in next generation budget tablets and low cost smartphones. But as of this month Allwinner will release the A23 with 2.75G connectivity. We will have to wait and see which solution comes out on top, but some industry experts believe the A23 has more specific peripheral communication interfaces. This advantage in communication interfaces could gain the A23 more industry support than the RK3026. Looking at the unit price they are fairly comparable but the RK3026 PCBA cost has a slight advantage being cheaper by 2-3%. As this is marginal we don’t think it will affect a developers decision but it could make a difference.

After reviewing the two SoC’s it’s clear that we are seeing two great, aggressively priced consumer level platforms. Choosing between the two really depends on your application. If you want a more powerful, more efficient SOC, go with the A23.  However, if you are looking for a smoother transition when upgrading from the single core RK2926, then the dual core RK3026 is the right SOC for you.