Read our detailed guide where we explain what OTA is, how it works, and why you must consider using it if you're looking at getting a custom Android device manufactured.

OTA stands for Over the Air (FOTA – Firmware Over the Air). It refers to the wireless delivery of new or updated software or firmware to devices such as smartphones and tablets. OTA can be used with Android, Apple, Microsoft, and virtually all other connected devices (such as tablets, smartphones, PC’s, and IoT devices).

How does OTA work?

The OTA process is self-explanatory in that it delivers updated software wirelessly or ‘over the air’. These updates are distributed over WiFi or mobile broadband using a function built into the smartphone or tablet’s operating system or through a special OTA app that’s given root access. The update goes out to all the designated smartphones or tablets from one central control panel.

There are 2 ways in which the update will be applied: 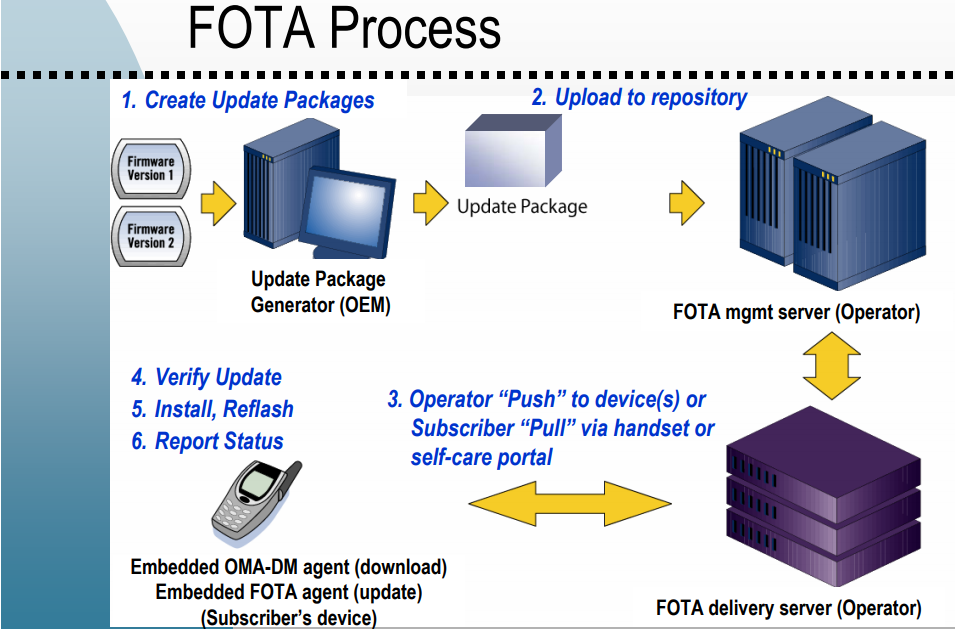 What can OTA do?

System Updates: Provided that the chipset being used in the device can support an updated operating system, then OTA can be used to send these updates. For example, if you, the brand owner, have an Android tablet on the market using Android 6.0, with OTA you can send Android 7.0 straight to the end user’s tablet. This also works for behind the scenes security updates, bug fixes, or other improvements to the software.

Fix Bugs: Software will always have bugs. Some are minor bugs, some are not. Bugs are not always found and removed or fixed before a product has been distributed. There are some bugs that could cause a recall for all the devices, however with OTA this would not be necessary as the bug can be fixed and the updated firmware sent to each device.

Add/Remove APPs: There is a silent install feature using OTA where an APP can be sent to a device to be downloaded or the user could choose to download a new app. OTA can also be used to remove an APP that may not be wanted any longer.

User Interface and New Features: OTA can allow you to update and change the user interface or add new features to your smartphones or tablets.

There are numerous reasons why choosing to use OTA makes sense when working with custom or off the shelf Android tablets or smartphones.

As mentioned above in the ‘What can OTA do?’ section, providing system updates and fixing bugs are much more efficient processes using OTA than having to upgrade software by hand, a time intensive and tedious process.

Before the launch of a smartphone or tablet, using OTA can reduce the software development and quality assurance process allowing the overall development to move faster.

Here is a real life example on why one OEM chose to use OTA:

In that case the issue was discovered before distribution. If an issue is discovered after distribution it could lead to the need to recall the devices which would have been more damaging, possibly bankrupting a company. The example shows that having the ability to fix bugs via OTA can help avoid disastrous situations.

OTA should also be considered for Android devices that might not have a touch screen, such as advertising displays, or android devices that are not easily accessible or remotely located. OTA provides an efficient solution to software updates for these types of devices.

Finding a trustworthy OTA partner is important as it does comes with certain security threats.

There has been some bad press about OTA in the past with one example being from an OTA company based in Shanghai called Adups. Adups abused the control they had to update the firmware over the air by installing hidden adware on some of the devices that they were benefiting from. Even creepier was installing spyware which was able to collect unauthorized personal information from those devices and send it back to servers in their own native China.

So does that mean you shouldn’t risk using OTA? No, of course not. It just means that you need to find a trustworthy OTA partner to work with so you can reap the benefits of OTA without feeling insecure. Of course brands can setup their own OTA system as well, but that takes expert know-how to implement and manage.

Some companies have reservations about the fact that others have control on what happens to their device but some OTA firms have an open access flexibility feature that allows the client to control the server on their own.

If you are looking at getting an Android smartphone or tablet manufactured you should at least consider using OTA. It’s not essential but it could save you and your company a lot of time, effort and resources.

Hatch can introduce you to a well-respected and trustworthy OTA company so that security is not an issue. If you have any other questions about OTA or are considering using it on your Android device, please get in touch via email to info@hatchmfg.com or leave a comment in the comment section below.