A detailed look at obtaining FCC certification (Federal Communications Commission) which is needed for electronic products that are sold in the US.

Last year I brought to you an article that explained 4 of the more important certifications that your electronic device may require. Included in that article was coverage of the FCC certification (Federal Communications Commission) which is needed for electronic products that are manufactured or sold in the US. This mark indicates that the electromagnetic interference from the device is under the limits approved by the FCC.

This month I visited an FCC testing facility to learn more about the tests and the procedures that each product must go through.

FCC Part 15 is a federal regulation that sets limitations on the amount of electromagnetic interference allowed from digital and electronic devices such as wristwatches, musical instruments, computers, telephones, and low power transmitters. Failure to comply with FCC Part 15 can have a harmful impact on anyone associated with your product: engineers, distributors, retailers and, of course, customers. The FCC’s remedies against non-complying products include the halting of all distribution as well as the issuance of fines to the manufacturer.

The unfortunate yet interesting aspect of this tour was that there was strictly no photography allowed once I got onto the premises, but I was able to get some images sent from the lab to enhance this article.

Wendy and Nancy greeted me upon arrival and after exchanging pleasantries we began the tour in the Radio Frequency testing room.

The RF laboratory conducts tests on Bluetooth, WiFi, 2G, 3G, and 4G/LTE. Each of these need to undergo a number of testing procedures. 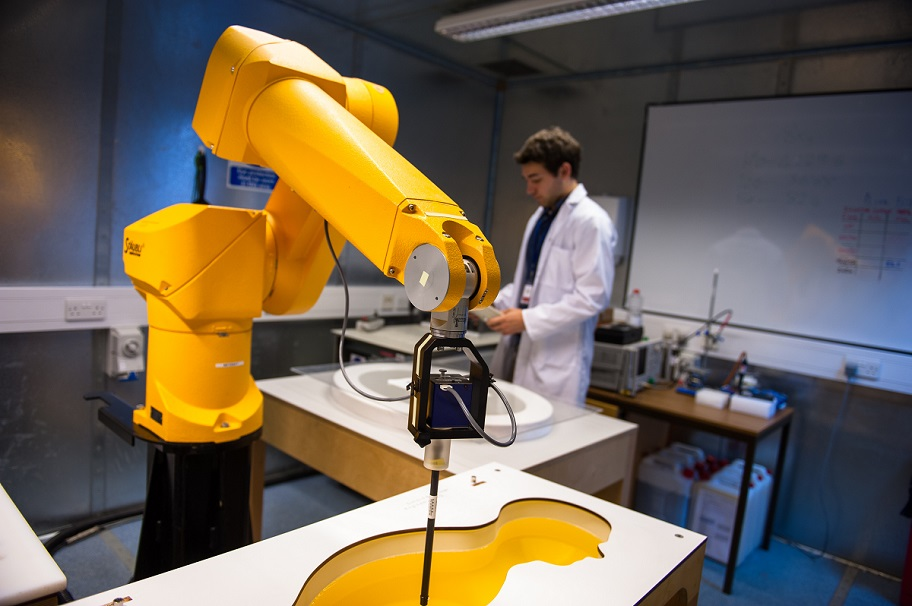 SAR testing uses standardized models of the human head and torso that are filled with liquids (see image above) that simulate the RF absorption characteristics of different human tissues. In order to determine compliance, each device is tested while operating at its highest power level in each of the frequency bands in which it operates, and in various specific positions against the dummy head and body, to simulate the way different users’ would typically hold a device, including to each side of the head.

To test devices for SAR compliance, the device is placed in various common positions next to the head and body, and a robotic probe takes a series of measurements of the electric field at specific pinpoint locations in a very precise, grid-like pattern within the dummy head and torso. 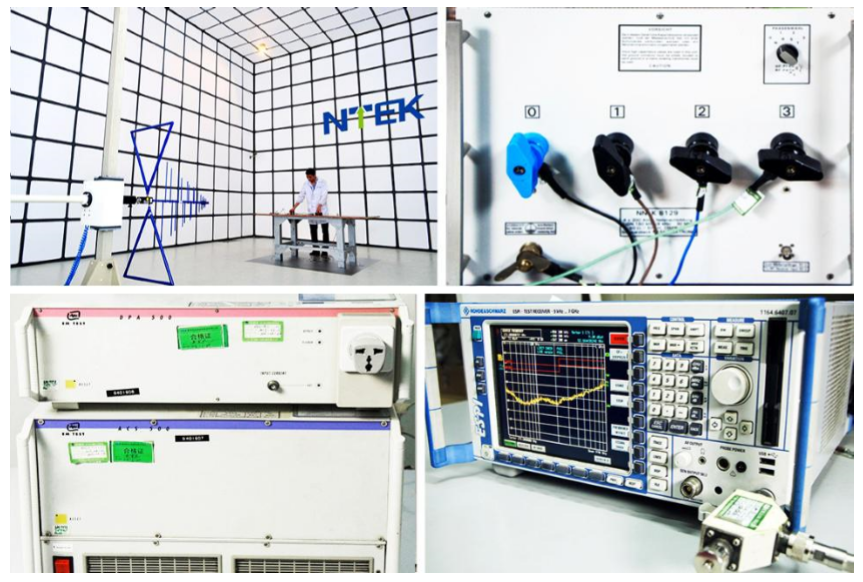 The Radiation Emissions Test room looks like it was taken from a Sci-Fi movie set. Radiated emissions testing involves measuring the electromagnetic field strength of the emissions that are unintentionally generated by your product. Emissions are inherent to the switching voltages and currents within any digital circuit, the only question is:

The electromagnetic waves don’t extend out from your product in a nice spherical pattern. The emissions tend to be pretty directional, so a test lab has to vary the height of the receiving antenna between 1 and 4 meters as well as rotate a turntable.

The receiving antenna picks up both the signal direct from the EUT (equipment under test), as well as a bounce off the ground. To increase measurement accuracy, the ground is covered with an electromagnetically reflective surface (aluminum, steel, wire mesh, etc.) and this ground plane must be relatively flat.

The test lab will scan the frequency band of interest and look for emissions that are close to the limits. Using a process called ‘maximization’, the test lab focuses in on each of these emissions and quantifies the amplitude of the field strength.

Your device creates electromagnetic energy and a certain portion of it will be conducted onto the power supply cord.

In order to restrict the amount of interference your device can couple back onto a power supply, test labs measure these emissions (usually from 150 kHz – 30 MHz) and verify that they comply with specified limits.

This helps to ensure that the local power supply remains relatively ‘clean’ and nearby devices won’t be affected by your device.

After the tour, I sat down with Wendy and Nancy in the meeting room and had a chance to find out some more useful information.

The FCC testing process usually takes between 3-4 weeks. That being said to be on the safe side I would recommend giving an extra week or two as a buffer.

The FCC testing facility will require 2-3 devices to conduct the testing. Once the testing is finished these devices can be returned but would most have cosmetic defects (scratches/marks) due to the testing. They may be useful to use for spare parts or another testing.

Wendy told me that failing the FCC is not common and that it usually depends on the quality of the supplier/manufacturer. Also, products can be modified with feedback from the lab so the manufacturer knows exactly what to change.

Radiation Emission tests are the most commonly failed test.

Passing the FCC testing certifies that the electromagnetic interference from the device is under limits approved by the Federal Communications Commission. FCC is simply checking the device to ensure that it won’t electromagnetically interfere with other products or cause harm to the public.

Manufacturing partners such as Hatch will arrange everything required for your products FCC testing.

Subscribe to our Blog to get monthly insightful guides and valuable news for FREE about hardware development and manufacturing directly in your mailbox!